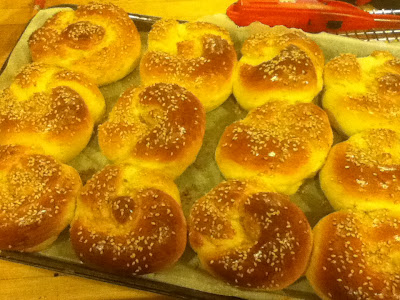 These rolls were baked in America (last catch-up post!) for the Seuda Shlishit of my sister's Shabbat Sheva Brachot. Hosting seuda shlishit was a bit last minute and we had no bread in the freezer for which to wash on. I immediately jumped on the opportunity to bake rolls and wasted no time choosing a recipe from Inside the Jewish Bakery (it was a real heimishe Shabbat- I made potatonik, too!). The picture below the formula for Sweet Egg Dough was quite enticing and reminded me of the bilkelach that we used to have growing up. I whipped out the scale and got to baking. I doubled the recipe to yield about twenty four rolls. It turns out that we didnt need nearly that many and I sent the rest of the rolls home with the newlyweds- finally gifted them with bread for their new apartment! I loved these rolls, they were soft and fluffy but not too sweet and the sesame seeds were a great counter-balance. Definitely going to make these again should a similar situation arise. These rolls are off to Yeastspotting! 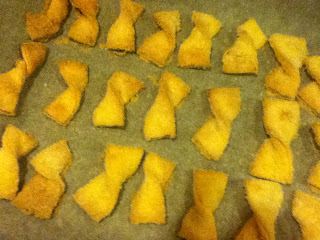 Lichvod Shabbat kodesh, I am finally posting this shul classic, sugar kichel. Upon receiving my copy of Inside the Jewish Bakery, I immediately wanted to put it to work. I chose the sugar kichel because I knew one of my sisters adores it and I thought it would be a nice throwback to the the times we actually went to the bakery and brought them home to enjoy (instead of me baking). This recipe hit the nail on the head, an exact replica of the cookies we used to munch on- eggy, crunchy and sweet. My father was extremely impressed. The cookies aren't hard to make, but between rolling, shaping and baking, it is a bit of a long process-I was up very late putting them together and baking them off, but just for that bit of nostalgia, the result was well worth it. 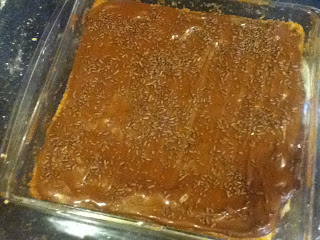 Every time I take a trip to America, I treat myself to a couple of new cookbooks. Making the decision of which ones to buy always takes me a while and a lot of research. One of the new cookbooks I got was Piece of Cake! by Camilla V. Saulsbury, a book about one bowl, easy cakes. I discovered Miss Saulsbury when I was looking for recipes for homemade energy bars and stumbled on her blog Enlightened Cooking. Her name sounded familiar to me and so I searched on Amazon and sure enough, I saw she wrote a muffin cookbook, for which I had read a review on a blog I often read. I discovered that she had just published this cake cookbook and eagerly read all the reviews. In short, they were all glowing. So I pushed this book to the top of my wish list and when the time came, happily ordered it. It came with just enough time to read through it and put it to use for Rachael's Shabbat Sheva Brachot. It took a while to decide what to make first, because the cakes all sound delicious, but also because many, most I should say, are made with buttermilk or sour cream for which there is no parve substitution. (The other issue I have with this book is that her weight measurements are totally off an unreliable. There's no reason for them to be there.) Anyway, I decided to go with one of the original wacky cakes that were the inspiration for this book. A wacky cake is a cake that is usually mixed up in the pan that is baked in and is said to be a creation from the era of rationed foods. I have previously made Chocolate Wacky Cake, so I thought the vanilla version to be appropriate. The cake came together very fast and I popped it in the oven. I was quite nervous about how it would come out, but I really needn't have worried. I cut off a tiny corner and found it to be really moist, if a bit dense, full of vanilla flavor and redolent of a certain box mix, but homemade and better! (I will admit, I find this to be complimentary!) I frosted it with her recipe for cocoa icing, which was also delicious but top it as you wish.Vanilla cake is a blank canvas. I finished it with chocolate sprinkles, just for the sake of being festive. The cake was a big hit with the sister in whose honor I made it, and I even sent off all the leftovers with her and her new husband. Here's too many more cakes being baked from this wonderful cookbook! 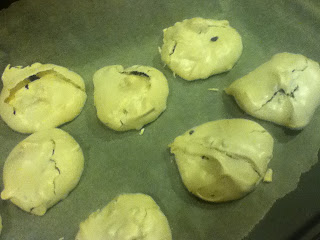 I have fond memories of meringues. I remember my mother whipping (ha) them up around Pesach time as a kid, biting, for the very first time, into a crispy cloud and discovering centers of chewy, melt-in-your-mouth sugariness. Fast forward to now-I owe the making of these cookies to my sister, Leiat. I had a surplus of egg whites after making sugar kichel (for another post!) and she asked me to make them. Now, I've made these simple cookies before and never felt the need to blog about them, but I used a technique for them that I've never used before so I decided to share it. This basic recipe comes from Al HaShulchan's first Chocolate book (which has finally returned with me to Israel!). The egg whites and sugar are first heated and then beaten. This step is no stranger to people who make buttercreams all the time, but I am not one of those people. This makes THE glossiest and most luscious meringue I have ever worked with. Pain in the neck or not, I will be making them this way from now on! Now, if you think there's too much sugar and the mixture will never form stiff peaks, fear not and beat on. It works! The original calls for grated milk chocolate, but keeping things parve, I decided to fold in some mini dark chocolate chips instead. Be sure to leave these in the oven to dry out fully. I took them out after 45 minutes but they were still wet inside. I returned them to the oven and let them cook a bit more and then turned the oven off to allow them to dry. And just so you know: the oven makes a great hiding spot for these if you need. No one ever thinks to look there! 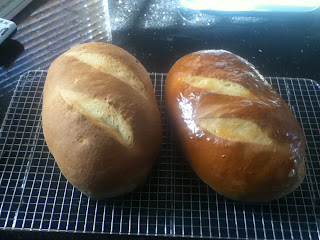 I know this has been a pathetically slow month for blogging, but now that the wedding is over (it was beautiful!) and I'm safely home in Israel, I have a bit of time to pick it back up again. The wedding I flew in for was that of my lovely sister Rachael. I thought it would be nice to bake her some loaves of fresh bread for her new apartment (although these loaves were devoured by the people in my house before they made it to hers!). I had been wanting to try out a recipe for potato bread for a really long time, having heard that mashed potatoes give bread a wonderful, moist, texture. So I pulled out my copy of Bernard Clayton's Complete Book of Breads (one of the only bread books I had left in America!) and decided to make his Potato Bread. I'm happy to have one thing checked off my list! This bread was more time consuming than others in its preparation due to the cooking of the potatoes. I also found that because of the moisture, the dough took a LOT more flour than called for before becoming a firm-ish dough. Once the dough was kneaded, it rose fast and baked beautifully. I brushed one of the loaves with some margarine after it came out and I like the gloss it gave it. Everyone loved this bread (even without knowing the secret ingredient!). My father (the toughest to please declared it spot on and my siblings enjoyed it in sandwiches. I'm just sorry it never made it over to the new apartment. These loaves are off to Yeastspotting which is being hosted this week by Tartine Bread Experiment!