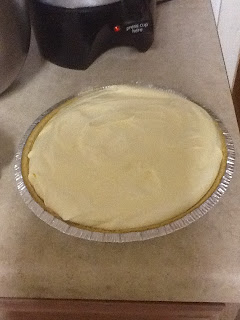 For my sister's Shabbat sheva brachot, (way back in August, when I was in New York!) I put myself in charge of making dessert. I went a bit crazy, makings two different types of truffles, two different types of biscotti and two different types of frozen pies. (Having just received a copy of Icebox Pies, it was clear they would be of the cold variety. Also helped break the heat!!) The first pie to catch my eye was none other than the Lemon Cream Pie, also the first pie recipe in the book. The idea is a familiar one, whipped cream folded into homemade lemon curd and poured into a graham cracker crust. Yum. I don't know anyone who can resist the delightful tang of lemon curd especially when mellowed by cream. Even my father, who is one picky dessert eater, stealthily went back for seconds. I used store bought graham cracker crust because that's what I had on hand, but I encourage you to make your own, it is so much better that way. As far as the lemon curd goes, it is quite easy but since it is made with whole eggs, you'll have a lot of straining to do to get all the cooked egg white out. Don't be lazy, strain as many times as you can. It makes all the difference.
Click for recipe...
Posted by Chavi at 1:25 PM 0 comments

Not too long ago, my vegetarian roommate hosted a dairy meal and she asked me to make dessert. I happily obliged and took the opportunity to make a dairy dessert. Thumbing through one of my latest additions, A Taste of Home Church Supper Desserts, I came across a recipe that seemed yummy and would feed a crowd. The recipe for Chocolate Chip Cookie Delight had a layer of cookie, a cheesecake layer, a chocolate pudding layer and was topped with whipped cream. Real decadence. Many of the recipes in the book use convenience products but as a compromise, I made my own cookie dough and used real whipping cream, so feel free to do the same. As you can see in the above photo, the guests of the lunch only managed to eat one row of the cake. What to do? I brought it into my soldiers the next day and they quickly demolished it. That's what soldiers are for. ;) I really like this cookbook because it is filled with down-home, crowd pleasing desserts that are tried and true winners. This is the second recipe I made and they were both winners. I am posting the recipe as written in the book, but as mentioned, feel free to substitute for the packaged products. 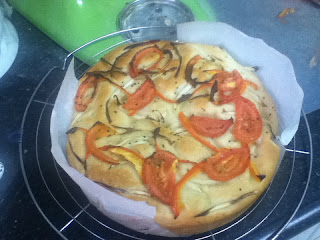 I made these breads to break my fast on Tisha B'av quite a while ago and am only getting around to posting now. This recipe is slighty adapted from a recipe from A Passion for Baking. The original calls for tomatoes, olives and onions but I swapped out the olives for peppers, a favorite of mine, especially when roasted. These foccacias are quite easy and fast to throw together and last quite a while. What I couldn't eat at the break fast I took for my flight home. Delicious. 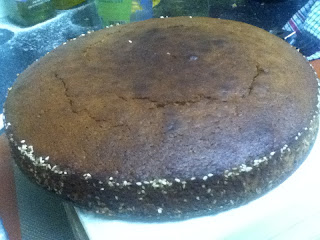 This cake was a runaway hit. Who would have thought that the humble blend of yogurt, tahini and silan (date honey) would turn into something so magical? I myself was a bit skeptical about this cake, but one bite of it changed my mind. My Israeli taste testers also really liked this. Truth be told, there's nothing not to like about this moist, whole grain cake. Baked in my favorite type of pan to form a tea cake, this cake would be perfect  as a breakfast or served with tea or coffee. If you want to bring a bit more glory to this cake, serve it with a scoop of vanilla ice cream and you've elevated it to a first rate, exotic, dessert. I used half whole wheat flour and half regular, but you can just as easily substitute self-rising flour and eliminate the baking powder.