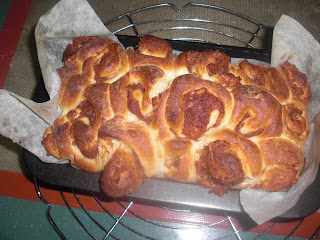 The apples are FINISHED! There are none left! And all because I just decided to throw them into a pot and  turn them into apple butter. Problem solved! (I've learned my lesson- no more apples!) What to do with the apple butter, you ask? Make Apple Butter Monkey Bread! This recipe is adapted from one from the Macrina  Bakery Cookbook. When I saw it, I thought, brilliant! Monkey bread and a way to get rid of those annoying apples. It took me a while to actually get to making it because boiling down the apples is a bit of a process. I slightly adapted her dough recipe and decided to shape the monkey bread to be more monkey bread like, instead of using her suggested method. I also totally forgot about her topping for the end bread and I also considered making a glaze for it, but I just got too lazy. This bread made my room smell so glorious and fall-like. (Although here in Israel, with the lack of rain and cold, it's still summer. In November. I call it schizo weather.) The way I shaped this was just to roll jelly roll style, cut into small pieces and dump them into the pan. I just let the girls rip away large pieces. I'm pretty sure it was a big hit based on how fast it disappeared... This bread is going to Yeastspotting! See you there!

For the apple butter, peel core and dice the apple. Melt the butter in a saucepan. Add the remaining ingredients. Cook until apples are fork tender. Remove pan from heat and mash the apples until they resemble coarse applesauce. Cool. If not using right away, refrigerate until using.

To make the dough, place all of the dry ingredients in a bowl and whisk. Add the dry ingredients and using your hands or a whisk blend together to make a shaggy dough, adding flour as needed to achieve this consistency. Allow dough to rest for ten minutes. Knead the dough until a smooth, tacky dough is formed. At this point you can cover and refrigerate overnight. If continuing on, place in a greased bowl and allow to rise until doubled. If making the next morning, allow the dough to come to room temperature before proceeding. Roll out the dough into a large rectangle. Cut the dough lengthwise in half. Spread half of your apple butter on one length of dough, repeating with the remaining apple butter and dough. Roll each dough piece up jelly roll style. Using a knife or a bench scraper, cut each log into small pieces and line them up inside a parchment lined 8x4 inch pan. Allow to proof until doubled. 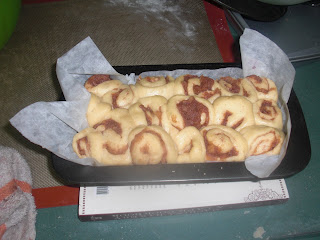 I went out for a long walk, sort of forgot about the dough and came back to a nice rise like this. Preheat the oven to 375. Bake until golden brown and delicious and your room smells divine. Remove from the oven and after five minutes remove from its pan to cool completely on a wire rack. Glaze with a mixture of apple juice and powdered sugar, if desired. 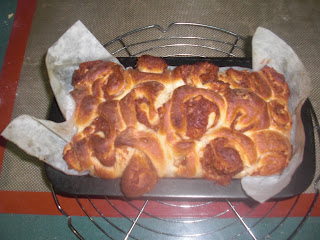