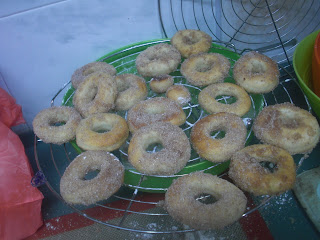 Chanuka is in full swing! I'm writing this on the fifth sixth night, having just lit the candles after a long day, including dinner at my sister's. Unfortunately, not all has been happy and festive. The worst fire this country has ever seen broke out before the weekend up north in the Carmel area. Much land has been destroyed and too many people have been killed. It was finally put out and today we finally got such much needed rain. Hopefully it wont let up any time soon. But I suppose I should just keep things light in tone... In the Chanuka spirit, I baked these Cinnamon-Sugar Baked Donuts last week. Truth be told, it's about time I made donuts. Years ago, I bought a donut cutter and have never used it. A while ago I acquired the new and adorable book Doughnuts by Lara Ferroni. I also ordered donut pans and finally received them today, but also found donut pans in Israel. So I figured it was about time. On my day in, I finally got to work. The recipe for these baked donuts is an easy one to put together. It might even become my new all purpose sweet yeast dough. The dough rises for an hour, gets shaped, rests and is baked for ten minutes. They are then dunked in margarine and coated in cinnamon and sugar. I originally tried to go for an Entenman's type donut by rolling them in powdered sugar but no one went for them. So I redunked and coated in cinnamon-sugar. They were quite successful and kept the Chanuka spirit alive, in my room at least. These donuts are headed for Yeastspotting. Happy holidays!

For the dough, place all of the ingredients in a bowl and mix until a shaggy dough forms. Allow to rest for ten minutes before kneading until a smooth dough forms. Set in a greased bowl to rise for an hour or until doubled in size. Roll the dough out on a silicone baking mat. 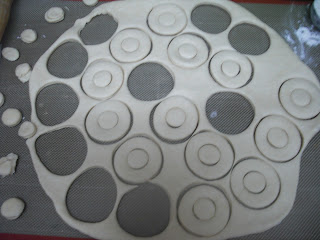 Use a donut cutter or one large and one small cookie cutter to cut out shapes. 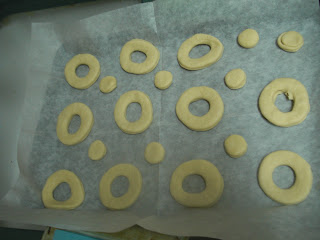 Place on a parchment lined baking sheet. Allow to rest for twenty minutes. Meanwhile, preheat to 400. 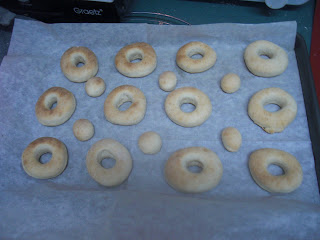 Bake for 8-10 minutes. Remove from the oven and when cool enough to handle dip in the margarine and coat with cinnamon-sugar. Place on a wire rack. 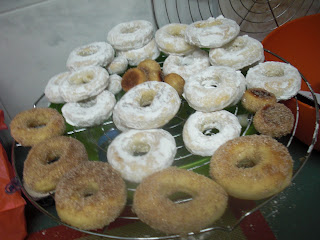 Here are the donuts. Sadly, the powdered donuts later became cinnamon-sugar. But they looked pretty. Happy Chanuka!
Posted by Chavi at 12:14 AM