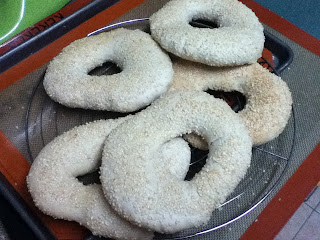 Two weeks ago, I spent our last out Shabbat with the girls in one of Israel's four holy cities, Tzfat. Recalling from last year that the food wasn't all that great, I decided to make my own bread. Since this was a last minuet decision, I needed something quick. While I was pondering what to make, it hit me to make regular pita. This thought led me to my beloved A Blessing of Bread by Maggie Glezer, which I've used extensively in the past but haven't touched in a while. Flipping through the pages, I saw this recipe for Bageleh, a ubiquitous bread here in Israel. These breads are made with her pita bread base, shaped as bagels, dipped into sesame seeds and flattened. Anything with sesame seeds is a winner in my book. I used the KitchenAid to put these together and the mixer made quick work of this dough. It turned out wonderfully soft and silky. They are immediately shaped and coated with water, dipped into sesame seeds and allowed to rise. Once they rise, they are flattened with a rolling pin, allowed to proof again and then baked on a baking stone. My breads lack the glorious color that commercial ones have because of the lack of sugar added (lack of fermentation time also doesnt help here) and the fact that there's no egg wash here. Nevertheless, these breads score major points for deliciousness. I enjoyed them throughout Shabbat plain or dipped into "salatim" or dips but feel free to slice them in half and use them for sandwiches. Below is the full recipe, but I only made half. This recipe has been Yeastspotted.
Israeli Bageleh
adapted from A Blessing of Bread 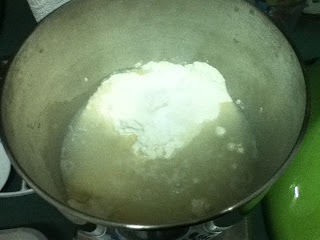 Place all of the ingredients into the bowl of your stand mixer, fitted with the paddle attachment. 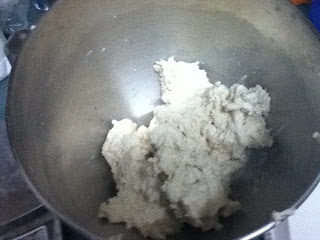 Mix on low until all the ingredients are combined. 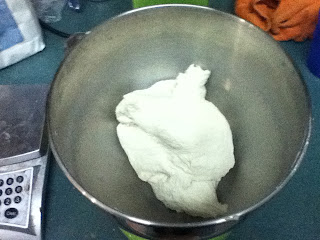 Switch to the dough hook attachment and mix on medium for five minutes, or until well mixed and fairly smooth. 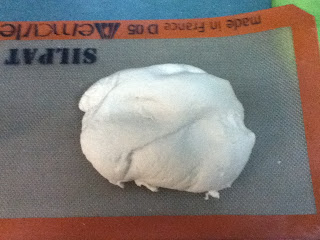 Immediately turn the dough out onto a clean surface. Scale the dough into ten pieces. 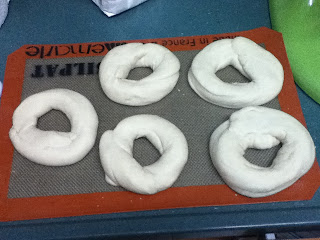 Roll into logs and attach the two ends to form a bagel shape. 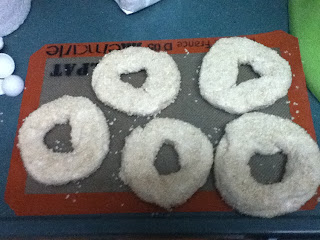 Moisten each ring with water and dip both sides into sesame seeds. Place the rings back on the baking sheets and allow to proof until doubled. 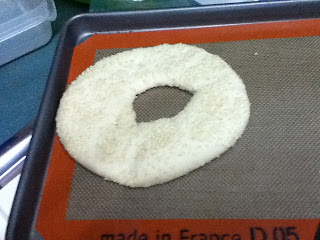 When the breads are proofed, flatten each one with a rolling pin. Allow to proof once more for about 1 1/2 hours. Towards the end of the rising time, preheat your oven to the highest temperature with a baking stone inside. Bake breads two at a time for about 4-5 minutes or until puffed up and brown. Remove from the oven and cool on a wire rack. Do not over bake or they will turn into crackers! Delicious, probably, but not bageleh. 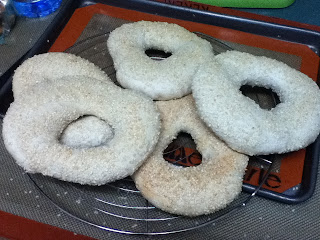